This is a variation of the Mythical Man Month, and probably equally unintuitive. However, the research in this area is bulletproof and has been verified thousands of times by independent researchers, and its conclusion is “Adding more developers to an already late project only makes it later.”

The reasons of course includes that you’re forcing your only productive resource to spend precious time teaching the new developers to understand the existing codebase, in addition to that now the project requires overhead, coordination, and collaboration, adding to its overhead – So while you believe that you’ll be able to finish faster, the exact opposite is the result.

If your job is to move 1000 bricks from A to B, and you’re late, adding more manpower to the job obviously results in finishing earlier. Hence, human experience have taught us that adding more manpower to a job, results in finishing the job faster. Therefor, when a manager is faced with the prospect of not finishing the software project in time, his intuition is to add more manpower to the job. However, you’ll only make it later. Understanding this though, and believing in it, requires huge amounts of experience – Experience most software development managers don’t have. In addition it requires courage, courage to say “NO” when your investors and CEO are telling you to add more resources to your team. However, a mature and experienced software development leader will easily be able to explain this fact to his managers, allowing for the project to finish as fast as possible, without adding to the cognitive load of his team, by adding more manpower to an already late project.

There exists many reasons to hire more manpower, but making the project faster, is not one of those

I just declined my “dream job” in Norway. A really great company, with an awesome idea, promising me large autonomy, for doing things “my own way”. They were also going to pay me €150.000 annually. My reasons for declining it? I couldn’t afford it. Now for the record, the base salary was €120.000, but knowing myself fairly well, I’d probably bring in at least €150.000 annually after bonuses and overtime was calculated.

Before you start objecting to me being an a$$hole, all greedy and such, please let me inform you about that I currently earn only a fraction of the above salary. Accepting the above job would imply me raising my salary at least 3x compared to my current salary. However, I live in Cyprus, and adjusting for a completely different set of taxes, and an entirely different set of living costs, the €150.000 in salary I’d be given in Norway, would effectively have resulted in that I’d have to significantly decrease my living standards, to the point where it would hurt badly.

Hence, the end result would be that I’d be forced to move from 9 months of summer to 9 months of winter. Dark and cold most of the year, living in a one bedroom apartment,  instead of living in my 4 bedroom dream mansion in Cyprus, on the middle of the square, of the most beautiful village that exists in Cyprus, only 25 minutes outside of Limassol with a car. I’d have to shave my living costs to the point where it would hurt every time I went to a restaurant, since a visit to a restaurant in Norway, easily would cost me some 3-5 times as much as it does in Cyprus. For a third of the above salary, I can easily go to restaurants 3 times a week in Cyprus, after having paid my expenses, without really noticing it even. And yes, my wife doesn’t even have to work – Her job is basically to make my life comfortable, serve me dinner when I come home, and make sure the house and yard is tidy – In addition to feeding our cats 🙂

In case you don’t understand why, let me inform you. I am from Norway, and I’ve lived most of my life in Norway. If I go to a bar in Norway and buy myself a pint of beer, that’s somewhere between 9 and 12 EUROs. In Cyprus it’ll cost me between 2.5 and 3.5 EUROs – The exact same beer!

In Cyprus I have about 20% tax, in Norway I’d end up paying almost 50%. An inexpensive 2 year old second hand Toyota in Norway; Cashing! Easily €30.000. In Cyprus I can buy myself a new Mercedes for the same price!

If I was a recruiter, instead of trying to headhunt people from abroad, to convince them to move TO Norway – I would spend my time trying to get Norwegian software developers to move FROM Norway, to continue working for their Norwegian employer. Why? Because they could easily cut salary costs in half, have the developer register some offshore company, eliminate employment fees (an additional 25% reduction of costs) – And completely get rid of social costs. The employer would basically save some 75% of his costs for employing the same person, and the employee would feel as if his salary had doubled. Since Cyprus is a member of the EU, this is really quite easy in fact, and perfectly legal too may I add – And according to my own accountancy, an invoice from Cyprus to Norway doesn’t need to even add VAT, since you only pay VAT inside of EU from Cyprus, and Norway is not (full) member of EU, but only member of ECU.

If you’re a headhunter, wanting to hire me for a Norwegian company, to move to Norway – I’ll need at least €300.000 annually to justify it economically to myself. If you want to hire me remotely for a 4th of that price, I’d love to talk with you though. In case you don’t understand why, let me explain it to you, by giving you an estimate of what I’d have to pay for simply living in Norway, with a decent living standard.

Sorry, but I simply cannot justify it financially moving to Norway without making at least somewhere above €300.000 annually … 😦

In case you still don’t get it, let me explain to you what me and my wife has planned today. I’ll pick her up after work, and we’ll go to a nice restaurant in Pissouri Bay. Afterwards we’ll probably bring a bottle of wine with us down to the beach, where we’ll probably end up swimming in the dark. The wine will cost me €3, the dinner roughly €25 for the both of us, and the water will be roughly 25 degrees Celcius. If I was to do the same thing in Norway, a bottle of wine would cost me some €15, the dinner would cost us some €80, and the temperature of the Sea would be roughly 15 degrees Celsius – Below you can see a photo of where we’re going to go swimming, only some 5 kilometres away from where we live – Sorry Norway, you loose … 😉 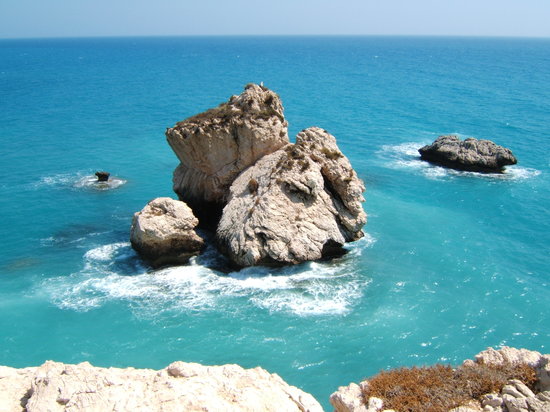